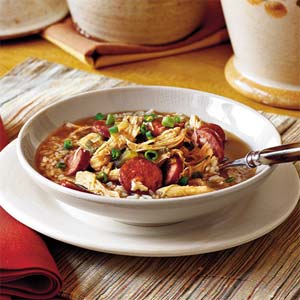 Cajun cuisine is the style of cooking named for the French-speaking Acadian or “Cajun” immigrants deported by the British from Acadia in Canada to the Acadiana region of Louisiana, USA. An authentic Cajun meal is usually a three-pot affair, with one pot dedicated to the main dish, one dedicated to steamed rice, skillet cornbread, or some other grain dish, and the third containing whatever vegetable is plentiful or available. 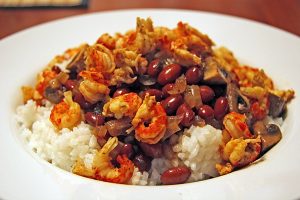 The KING OF THE CAJUN Gourmet Brand seasonings were inspired by the down home southern cookin’ of the creator’s Grandparents and Great Uncles & Aunts who were brought up in Louisiana, Oklahoma, Texas, Mississippi and Arkansas.

Rice proved to be a valuable commodity in early Acadiana. With an abundance of water and a hot, humid climate, rice could be grown practically anywhere in the region, and grew wild in some areas. Rice became the predominant starch in the diet, easy to grow, store, and prepare. The oldest rice mill in operation in the United States, the Conrad Rice Mill, is located in New Iberia. The aromatic vegetables bell pepper, onion, and celery are called by some chefs the holy trinity of Creole and Cajun cuisines. Finely diced and combined in cooking, the method is similar to the use of the mire poix in traditional French cuisine — which blends finely diced onion, celery, and carrot. Characteristic seasonings include parsley, bay leaf, green onions, and dried cayenne pepper.

High on the list of favorites of Cajun cooking are the soups called gumbos. Gumbo exemplifies the influence of African and Native American food cultures on Cajun cuisine. The word originally meant okra, which is a word brought to the region from western Africa. Okra, which is a principal ingredient of many gumbo recipes, is used as a thickening agent and for its distinct vegetable flavor.

Another classic Cajun dish is jambalaya. The only certain thing that can be said about a jambalaya is that it contains rice and almost anything else. Usually, however, one will find green peppers, onions, celery and hot chile peppers. Anything else is optional.

A filé gumbo is thickened with sassafras leaves after the stew has finished cooking, a practice borrowed from the Choctaw Indians. The backbone of a gumbo is roux of which there are two variations: acadian, a golden brown roux, and creole, a dark roux, which is made of flour, toasted until well-browned, and fat or oil. The classic gumbo is made with chicken and the Cajun sausage called andouille, but the ingredients vary according to what is available.

Cajun folkways include many ways of preserving meat, some of which are waning due to the availability of refrigeration and mass-produced meat at the grocer. Smoking of meats remains a fairly common practice, but once-common preparations such as turkey or duck confit (preserved in poultry fat, with spices) are now seen even by Acadians as quaint rarities.

The crawfish boil is a celebratory event where Cajuns boil crawfish, potatoes, onions and corn over large propane cookers. Lemons and small muslin bags containing a mixture of bay leaves, mustard seeds, cayenne pepper and other spices, commonly known as “crab boil” or “crawfish boil” are added to the water for seasoning. The results are then dumped onto large, newspaper-draped tables and in some areas covered in spice blends, such as Zatarain’s, Louisiana Fish Fry or Tony Chachere’s. Also, Cocktail sauce, mayonnaise and hot sauce sometimes used. The seafood is scooped onto large trays or plates and eaten by hand. During times when crawfish are not abundant, shrimp and crabs are prepared and served in the same manner.

Attendees are encouraged to “suck the head” of a crawfish by separating the abdomen of the crustacean and sucking out the abdominal fat/juices. The practice is known by the common phrase is “Pinch the tail, suck the head.” Other popular practices include kissing the tail section of a soon-to-be-cooked crawfish, leading to the vulgar phrase: “Kiss my ass, suck my head, eat me.” The phrase has been printed on shirts and posters in years past. Often, newcomers to the crawfish boil or those unfamiliar with the traditions are jokingly warned “not to eat the dead ones.” When live crawfish are boiled, their tails curl beneath themselves. When dead crawfish are boiled, their tails are straight and limp.

King Of The Cajun has been providing gourmet Cajun seasoning, Louisiana style seasoning, and southern barbecue sauce for many decades. This extensive experience means you get to enjoy all of the best Cajun dishes without the guess work. When you purchase Cajun seasoning from King Of The Cajun you will receive Free Cajun recipes to help you create amazing Cajun meals with ease. OOWEEH, NOW DAT’S CAJUN GOURMET! Bon Appetit!